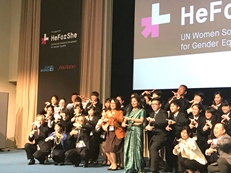 ＊以下は上記の紹介分の英訳
Hakumon Herald, a student Japanese-English newspaper issued by the Chuo English Newspaper Association, features Chuo University's International Week 2016 at its website. The association had been active for more than 40 years from 1956 before being disbanded in 2001 in the wake of the prolonged campus dispute. However, a group of volunteer Chuo students revived it in 2012 with the help of its alumni and many other supporters.

Since its revival, the association has issued more than 10,000 copies of its newspaper during the four years of its activity. Its articles are available both on its website and in hardcopies. They introduce extracurricular volunteer and sport activities which may be of interest to Chuo students and those who are keen to know more about Chuo University. They also periodically feature social issues discussed from the students' viewpoint. The last edition in August 2016 took up the lowering of the voting age to 18 years in Japan and its possible impact on the political awareness among the youth while introducing the activities of Chuo's ice hockey club and rugby club.

The latest feature on the International Week consists of articles about its brief background and interviews with faculty members and students who have been involved in its organization and planning. It also include columns introducing the history of the Japan-Mexico relations and some aspects of the Mexican culture.